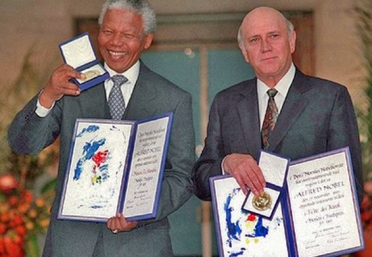 In 1993, F.W. de Klerk and Nelso Mandela were co-recipients of the Nobel Peace Prize for their combined efforts to bring about the end of apartheid in South Africa, and establish a non-racial democracy where everyone was allowed to vote. Together, they created a transitional government made up of members of the African National Congress (ANC), the National Party (NP) and other political groups within South Africa. This model has been copied by other countries in the years since and is still viewed as one of the most successful turnovers of power in the 20th century.